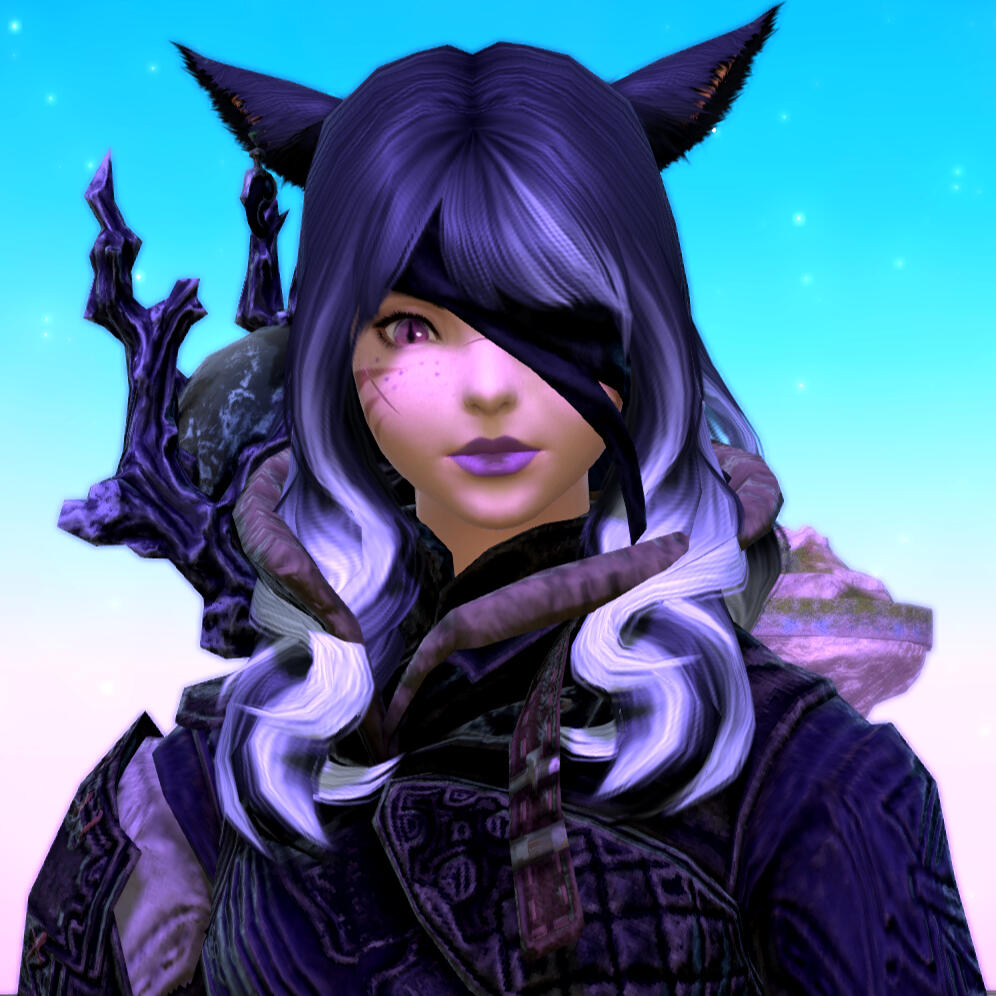 an ocean-burning flame at the tip of your pipe

FFXIV Roleplaying Profile; Crystal Database.[if RP tag is on, I'll RP! /tell if you're not sure]updated late jan 2023 with a voice claim;
also early jan 2023, with aprofile overhaul
to match her themes and past events better. 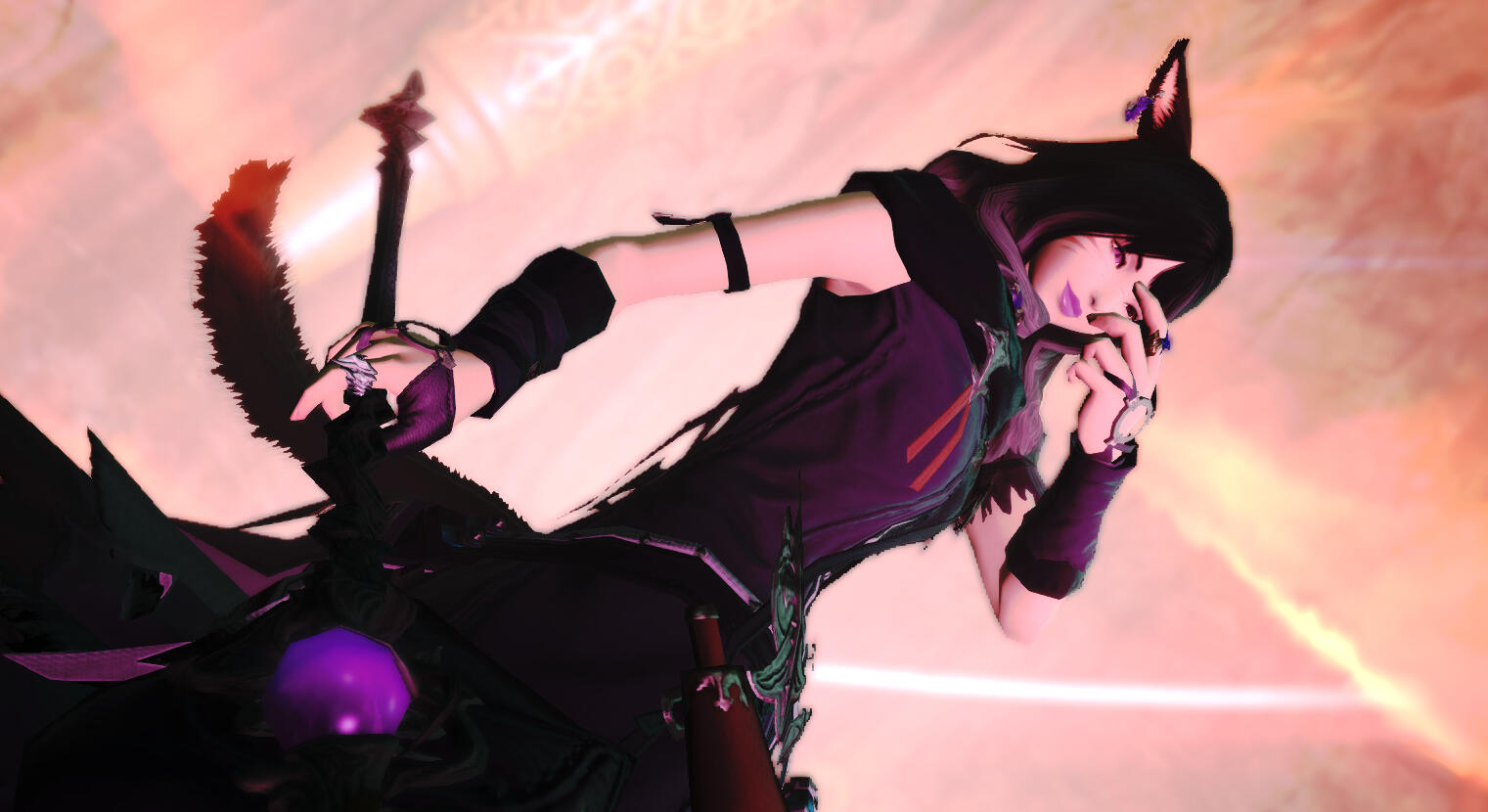 Name: A'etalia Rhel
Prefers "Talia" for short.Age: Mid-20s
Race: Seeker Miqo'te
Gender: Cis Woman (She/her/hers)
Romance/Sexuality: Pan (open relationships)
Alignment: True Neutral
Voice & Accent Claim*: Harley Quinn - Margot Robbie, Birds of Prey (2020) and The Suicide Squad (2021) [clip - warning for language, blood]Canon Jobs: Thaumaturge, Culinarian, Bard
Black Mage, Blood Mage, Hemomancer + more?Appearance: Wears patch over (missing) left eye. Black hair that seems both singed and dying, as if drained of life, on the edges. One pink-irised eye that deepens into purple in the sunlight. Slender; it's clear her strength/physicality isn't her focus.
Her left eye socket has a focus for Black Magic.Visible inventory: Her items rotate by day, but often she's seen with a little cloth sling of pastries attached to her hip. Her staff is never far away, usually slung onto her back. Sometimes has a "convertible" lute.Aether: If you have aethersense, her aetherpool is pretty deep. It leans a bit fiery/red and a bit umbral. She always seems to be passively pulling in aether at a higher rate than normal...--
* (Author note: I'm from New Jersey and, look, it's just a good accent.)

more than meets the eye. 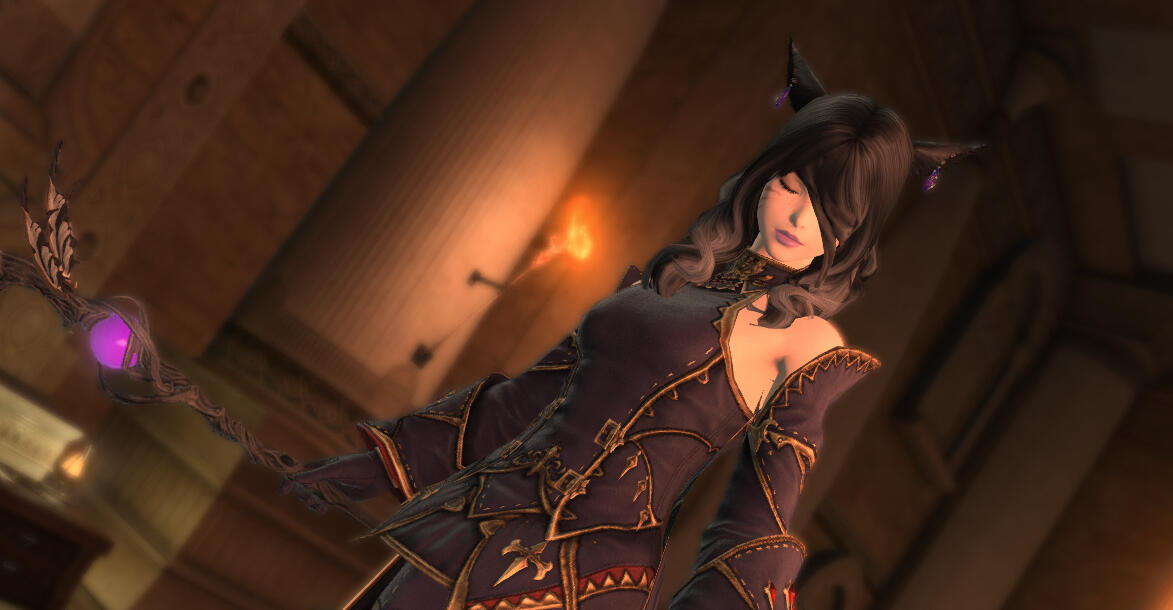 Combat Skills/Abilities: High-level aethersense, advanced thaumaturgy and battle magics otherwise, rudimentary conjury (cuts, bruises, etc).
Black Magic expert, oddly without being a Void expert. Blood magic, hemomancy.Quirks: Quick learner, jack of many trades, sweet, bubbly, helpful, open about her mundane sins and sexuality.Possible turn-offs: Arrogant to a fault. Her high energy may come off as too much. Bit of a talker if you get her going. Catty, loud, and in-your-face.And more yet:A'etalia is a thaumaturge looking to leave a legacy on her own terms. She's fiercely loyal, cheery, and vocal.This Miqo'te loves learning about everything; it's what brought her trekking out of her village. The more she knows, the more she can manage, the more she can protect.By day, "Talia" runs a bakery, where she specializes in high-volume deliveries such as bread for venues, restaurants, and more. She lives with her partner and former tribemate, A'myshtea.In the long run, the Seeker aims to become a master of battle magics. She knows she can't use certain styles except in very strict circumstances, so she doesn't parade this around. However, over the few years since the tomes of the Black were made available, she has carefully learned how to manage it.A series of life-shattering events, traumatic as they are, have solidified this desire. While she lost an eye to a dangerous foe, without hesitation, she used this as motivation to seek out a more permanent solution for a Black Magic focus. Which is to say, she pretty much stuck a whole one in her eye, meaning her whole body can act as a conduit. She's justifiably secretive about it, but those with aethersight or aethersense can easily tell something's up.A'etalia has since thrown herself deeper into battle magics, as well as questionable ways to enhance them. She believes she has the power to startle gods and sear the edges of the seas, and now, she finds herself restless for it - but she may be losing sight of why she became so powerful.A'etalia is also a small business owner and will remind you at any opportunity.

what does destiny have in store? 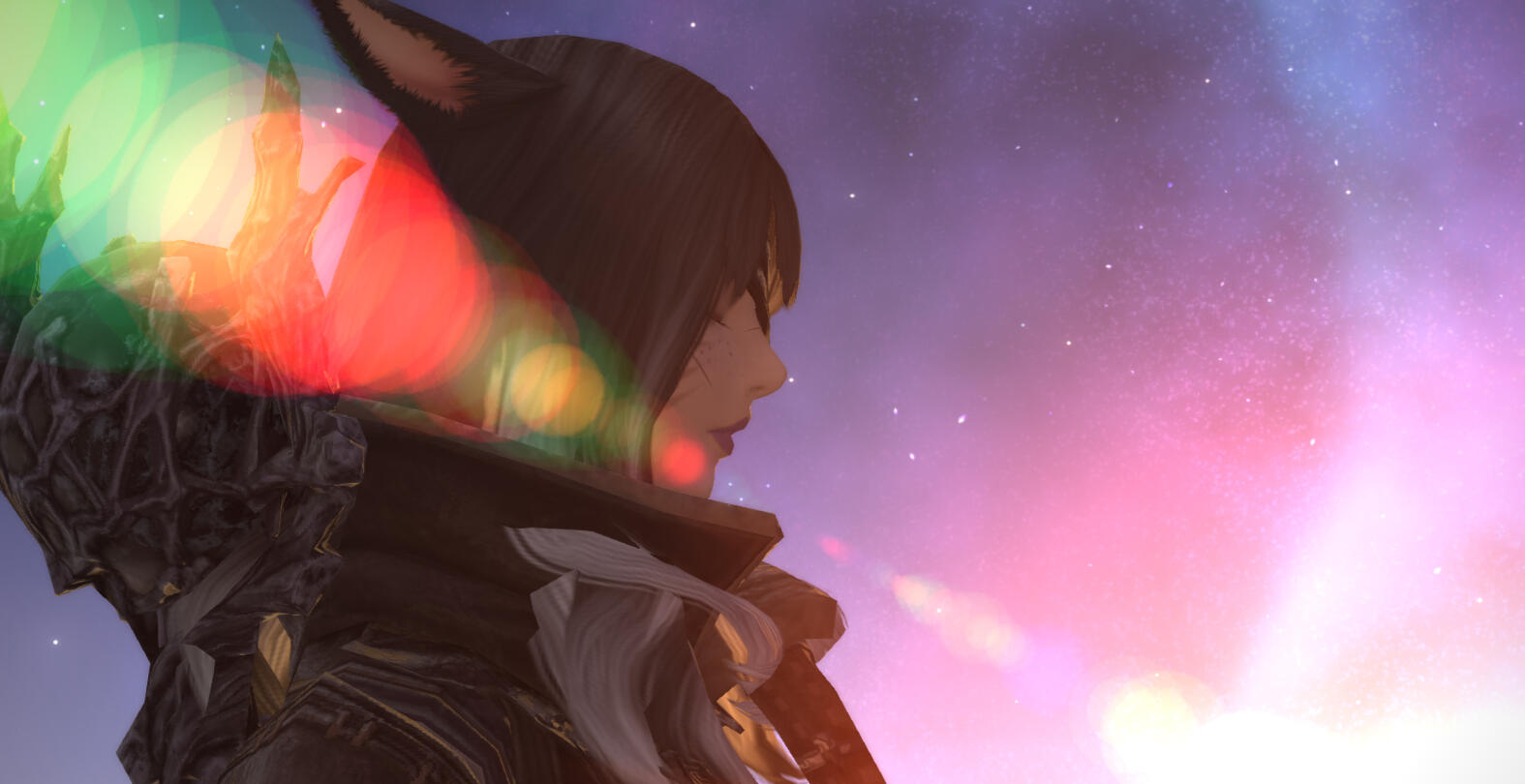 A'etalia works two jobs: at the Ossuary, to maintain access to its resources, and also as a baker! She carries around about six (6) little free pastries a day, usually biscuits. Need catering? Ask! She specializes in large orders, especially for cafes and restaurants!

[For mages/etc.]
While her baking work has drawn her away, if you've been studying for a long while at the Arrzaneth Ossuary, chances are you've seen A'etalia in the past buried in a pile of books. Sometimes even falling asleep! And increasingly, you've been seeing her tap into the recently-permitted shelves of Black Magic tomes. The Guild hasn't been given cause for suspicion about her, yet there's a twinkle in her eye when she finds herself in that rabbit hole... (Ah, and not to mention the rumors of her missing eye.)Talia draws eyes at the Ossuary nowadays. "Hey, wasn't she possessed at one point?"

A'etalia is learning how to tell stories through the art of barding. While she can't move crowds like a proper bard can, she's an enthusiastic player, and she's always eager to hear praise (and suggestions).

Love to spar? So does A'etalia. But it sounds like she won't take you up for a match unless she thinks you're tough enough to take her spells. It's not merely out of arrogance if you ask; there's more than a touch of concern for her potential opponents.[OOC: I roleplay fights at a high power level, and Talia will turn prospective fighters down in-character if she deems them unprepared for high-skilled magical combat. Inquire within!]

If she's not wearing gloves, her hands and arms are frequently bandaged. It's not normal for a thaumaturge of her skill level to be hurting her hands, right?
[OOC: Delving into this goes into her blood magic storyline, which has themes with lorebending, implied self-harm and blood.]
There's a rumor that these are cuts inflicted in the use of blood magic...?

[RARE/For Ul'dah Regulars] A'etalia has been rumored heavily to be involved in several deaths of different scales: one of a Garlean refugee, one of an overly eager tabloid reporter, a horrific scene of Draconians in the north, and a bloody scene of cultists in the Shroud. There are no eyewitnesses, though, and it's hard to prove certain magical deaths so easily.

Most weekdays, you can find A'etalia lingering around Pearl Lane in Ul'dah. It's possible to find her nearly anywhere the average Eorzean can manage, though, as she makes occasional visits and deliveries for her catering and has an apartment in Shirogane. She tends to be at her friend's venue on weekends, where she's also known to do more under-the-table business alongside the owner.
She knows of Norvrandt, too, but it takes a hefty toll for her to visit...
[OOC: I only tap into this if you do, too.]

If you're still here and trying to think of a hook, just get creative and go for it! I'm sure we're both flexible and smart enough to roll with it. 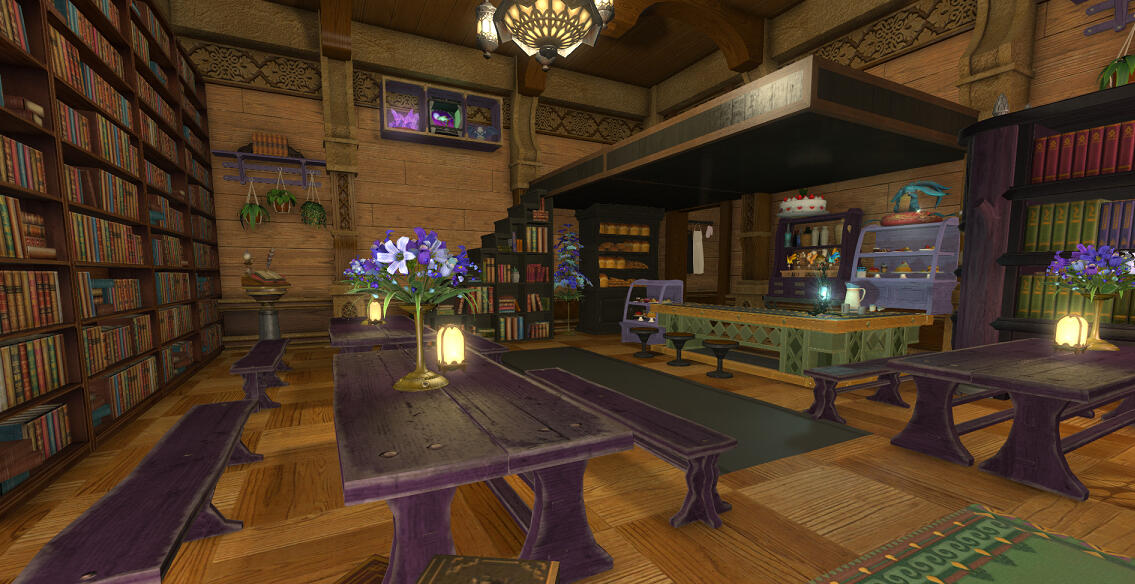 STUDIUM CAFE - Mages, academics, thaumaturges! Study, snack, and share discoveries!There's plenty of room for seating outside and inside. The benches inside resemble something more like an academic library than a cafe, but it does seem inviting for those who wish to come in large groups. Walls and walls of book lines one side, and some - which seem to be focused on odd humans of history and bodily aether research - are strewn on the floor.Inside are also pastries and drinks. A small jar is placed on the bar, labeled, "Leave what you can!" But if you try the pastries, they seem almost too good to not be selling.Downstairs is the kitchen, which is set up for large-scale operations, the core of her operations. There's also a residence and office, where Talia and her partner live.

A'etalia, with the help of her former tribemate, A'myshtea, has acquired this estate so she can be close to the Thaumaturges' Guild. The two miqo'te share this residence for the time being.Talia specializes in large deliveries for cafes and restaurants, as well as catering. Want an excuse to have her bake for you? Ask!

((Feel free to use this as a meeting point or venue, if you wish to, for roleplaying! I hope to hold mage- or academic-themed events down the line, especially given the giant promenade outside. If you want to use this venue for a private event, let me know!)) 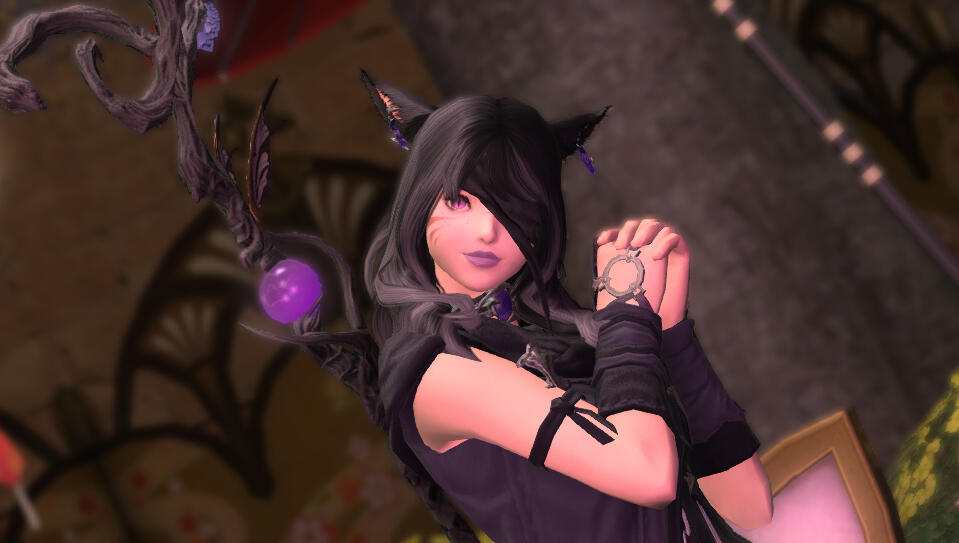 General RP guidelines:
• Walk-up RP approaches welcome
• No ERP-first interactions. If you came to look into ERP exceptions, you are not getting ERP. I ERP with established people.
• No partnered romance (she's taken anyroad)
• 21+ preferred
• If I'm barding with the RP tag on, feel free to interact! Friends and more urgent roleplay scenarios will take priority, but do note I can't always type while playing, so I may wrap up the song first.I especially enjoy:
• Mirror roleplaying. Will do paragraph roleplays as well as rapid-fire dialogue scenes so long as each matches the tone of the situation.
• Long-term, mutual character development, or at least playing well into characters' "natural" dynamics.
• Slice-of-life weaved into longer-term situations.
• Intense, longer plots & campaigns.
• Mature/dark/edgy themes. Do ask me first, I'm down for a lot... No, like, really, A'etalia gives off a cheery vibe, but I love edgy characters, themes, and plots. Even going into extremes. Chat if interested.Big nos:
• Being openly cruel about your politics of respect. This includes transphobia, racism, and pedophilia. Respect others, and don't be weird, or else catch some hands.
• Edgier/mature scenes with players under 18.I am:
• Mid-20s femme-ish IRL, been text roleplaying for upwards of 15 years.
• On my main! When I'm on A'etalia, I may not necessarily be roleplaying. However, feel free to ask! A roleplay tag does mean I'm down, but /tell if you're unsure!If you want stuff with a less offputtingly-energetic character, check out her fellow ex-villager. (Canonically, the two know each other. but I obviously can't have them in one place in-game...)new twitter for ffxiv stuff!